Bisexual people live in every state and are ethnically and racially diverse. More women identify as bisexual than men. Bisexual people are parents, teachers, athletes, writers, politicians, musicians, and artists. While bisexual people comprise more than half of the lesbian, gay, and bisexual population, violence, poverty, discrimination, and poor physical and mental health outcomes within the bisexual population—often at rates higher than their lesbian and gay peers—point toward an urgent need to provide services and support for this segment of the community. 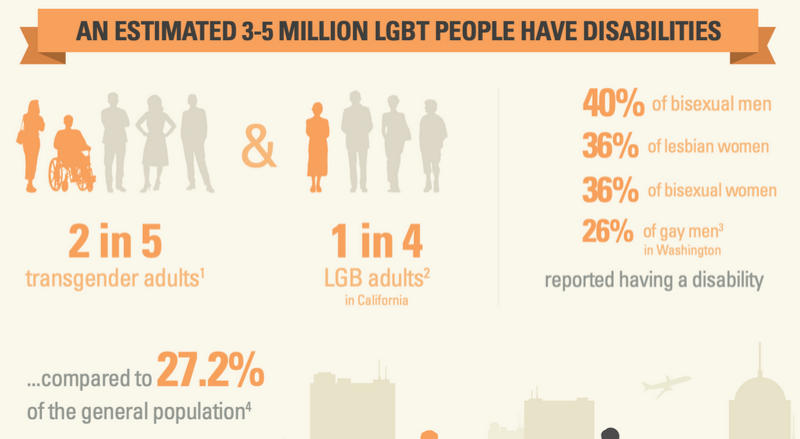 July 2019  - In light of the 29th anniversary of the Americans with Disabilities Act (ACA), this infographic provides a short summary of what we know about LGBT people with disabilities in the United States.

Invisible Majority: The Disparities Facing Bisexual People and How to Remedy Them

September 2016 - Bisexual people are frequently swept into the greater LGB community, their specific disparities made invisible within data about the whole community. This report focuses on the “invisible majority” of the LGBT community, the nearly five million U.S. adults who identify as bisexual and the millions more who have sexual or romantic attraction to people of more than one gender.

August 2015 - Stigma, legal inequality, and lack of bisexual-specific data contribute to poor outcomes for bisexual people in the United States. This infographic explores these three factors and their impact on bisexual peoples’ health, safety, employment, and economic security.

September 2014 - Co-authored by the Movement Advancement Project, BiNet USA and the Bisexual Resource Center, Understanding Issues Facing Bisexual Americans is a new resource offering an overview of the economic and health disparities facing the bisexual community, and recommendations for supporting bisexual people through advocacy, research and programming.

View the Report
View all of our Reports

MAP membership and certain MAP materials are restricted to the staff and board members of LGBTQ movement organizations and/or major funders of the movement for LGBTQ equality. Click below to become a member of MAP.

“Gender identity” is a person’s deeply-felt inner sense of being male, female, or something else or in-between. “Gender expression” refers to a person’s characteristics and behaviors such as appearance, dress, mannerisms and speech patterns that can be described as masculine, feminine, or something else. Gender identity and expression are independent of sexual orientation, and transgender people may identify as heterosexual, lesbian, gay or bisexual. Laws that explicitly mention “gender identity” or “gender identity and expression” primarily protect or harm transgender people. These laws also can apply to people who are not transgender, but whose sense of gender or manner of dress does not adhere to gender stereotypes.

Thanks for signing up!

We appreciate you signing up for the MAP newsletter. You will receive an automatic email confirmation shortly.

Choose a State or Territory

Choose a State or Territory